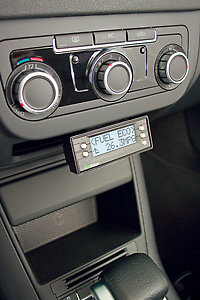 According to the US Federal government, the way you drive can affect fuel economy by up to 33%.
See http://www.fueleconomy.gov/feg/driveHabits.shtml

Most of us are aware of how you can drive a vehicle in a manner to significantly reduce fuel economy. It is surprising though, how many don’t realize all of the subtle things they can do to improve fuel economy. Part of the problem is the poor feedback we typically get about what improves fuel economy and what makes it worse. Calculating the fuel economy at every fill up is like going on a weight reduction plan but only weighing yourself at your annual medical checkup. The nagging of the bathroom scale at the morning weigh-in is what drives us to make the necessary changes to reach our goals.

Years ago, some vehicles added an “economy” gauge to indicate when you were using more or less fuel. These were based on manifold vacuum and couldn’t really tell you your fuel economy at that moment and would often tell you that you were getting better mileage when you actually weren’t. For instance, shifting to a lower gear would move the gauge higher into the economy range. Actually, shifting to a lower gear almost always lowers fuel economy. 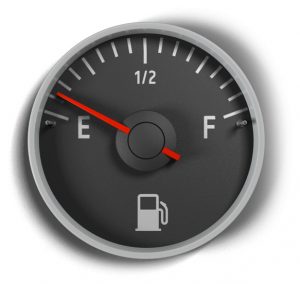 As cars became more computerized, some vehicles added fuel economy gauges that really did show fuel economy. This was a big step forward, but still lacked the kind of feedback that would show the overall effect of different driving habits. You easily saw that when you stepped on the gas, the economy dropped and when you let off, it went back up. This something you already knew, but now you had some real numbers to go with it.

The next step to improve the feedback was to show the average fuel economy as you drove. This allowed you to see what adjustments in your driving styles could be used to actually raise your average fuel economy. When you stepped on the gas, the average would start decreasing. When you let off the gas, it would start increasing. It became easy to figure out how to make the economy go down less when it was going down and up more when it was going up. You could make it into a game to see how high you could get the MPG. The best part was, you got to redeem your points at the gas pump!

Although some cars have this feature today, many don’t. The solution to this problem came from emissions requirements called OBDII. Starting in 1996, all cars and light trucks sold in the US and Canada were required to follow standards on how to report information about what the engine was doing in the way of emissions. A gadget could be made to plug into the OBDII connector inside the car that could provide all kinds of data on how the engine was running and if there were any problems. The ScanGaugeII is a commercial product that can be plugged into this connector and provide real time information on the vitals of the engine as well as retrieve the codes when there was a problem and the “Check Engine Light” was on. Another neat thing came from this – the vehicles fuel use and economy could also be determined.

The ScanGaugeII and ScanGaugeE both provides real time MPG just like the factory options. More importantly, it also shows averages. It shows fuel use and economy for each trip you make, for all the trips in days driving, for all of the previous day’s trips and over the entire tank of fuel. Each time you start driving after the engine has been off for at least three minutes, the “CURRENT” trip reset to 0 MPG and starts increasing as you start driving.

You will see the MPG value go up and down as you drive. It will become very apparent what you can do to maximize the value. At the end of the day, you can see the average for the day in the TODAY selection and compare it to the PREVOUS DAY values.

In order to get good real-time feedback, you would set up the CURRENT TRIP MPG as a gauge. You could also display the actual amount of fuel used on the trips, since using the least amount of fuel is the actual goal. This allows you to compare different routes to places you often travel to, like work, school, the mall, etc.. When you fill up, you input the amount you paid per gallon. This allows the ScanGaugeII to show the actual cost of each trip as you are driving. This is a good way to see what each trip is costing. You may find that driving further to get a lower price on gas is actually costing more then you save.

Who knows, you could even become a hyper-miler. These people use every trick that they can find to get trip MPGs that are more then double the EPA ratings! At Hybrid Fest in Madison Wisconsin at the end of July in 2007, dozens of hybrids did a mileage challenge. The course was 28 miles through downtown Madison, out into the country and back through the city. ScanGaugeIIs were used to measure the amount of fuel it took to cover the course. One Prius used 0.19 gallons (147 MPG) Most of the others got well over 100 MPG. These people don’t lose sleep over the price of gas anymore.