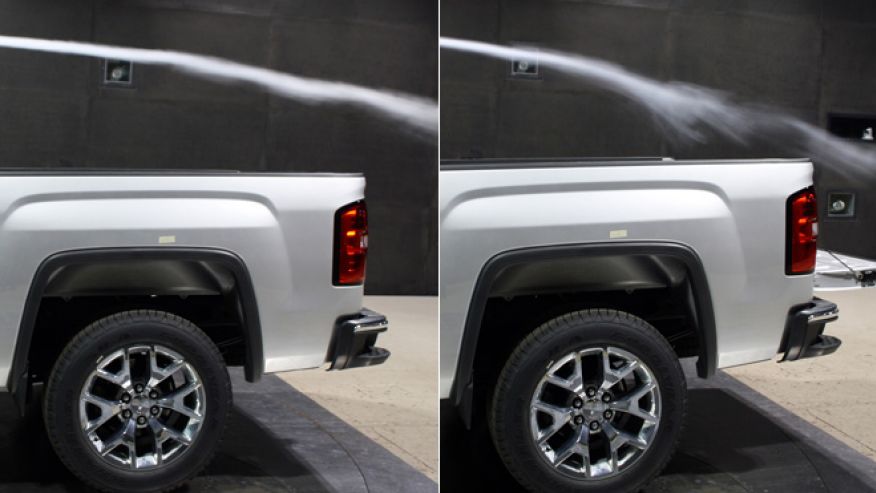 With gasoline going ever higher in cost, I’ve noticed people putting more effort into squeezing some extra miles out of a tank of gas. In particular I’ve noticed more and more people in pickup trucks driving around with the tailgate down. I believe this is being done with the belief that the air can flow easier through the bed of the truck and, with less wind resistance, the gas mileage will go up.

This is a good theory. Without an easy way to measure it, it stays just a theory.

Another theory I have seen is that the mileage will be higher with the tailgate up because air going over the cab creates a vacuum in the bed when the tail gate is up, causing the air to go over the bed which reduces drag. What should I believe?

I recently got hold of a new device called a ScanGauge that can attach to the OBDII connector in my truck and read out the gas mileage in realtime. Finally, a way to test the theory.

To get good scientific data, I needed to run the truck over a measured distance in as close to identical conditions as possible, with one exception – once with the tailgate up again with it down. To make the test even better, the test should be run in both directions in order to cancel out terrain and wind effects. The test had to be done at a constant speed within a few minutes of each other.

I chose a recently completed 6 lane freeway which still had very little traffic. The speed limit was 65MPH. By traveling in the slow lane at 65MPH using the cruise control to keep the speed a constant 65MPH, I was able to maintain this constant speed over a 5 mile coarse.

Before starting the test, I got the truck up to 65MPH and set the cruise control. I set the ScanGauge in the CURRENT TRIP mode. This mode allows a reset to be done at any time so I could
accurately start the measurement when I passed a milepost. The fuel economy display showed the average MPG starting from the time the RESET was pressed.

The test was started when I passed milepost 15 and completed at milepost 20. I then went back the other direction pressing RESET at milepost 20 and noting the trip MPG at milepost 15.
The average of these two was taken for each condition, tailgate up, and tailgate down.

The results were surprising.

By surprising, I also mean disappointing.

Did the mileage go up with the tailgate down? Yes, but the amount is so small as to be statistically insignificant. A single gust of wind during one of the 10 mile runs could account
for this much difference.

If someone out there has a removable bed cover, I would like to see this kind of test run for it on and off. For someone with more ambition and one of those caps that blends into the
truck, this kind of test could be even more revealing. Does the cap help or hurt MPG?

For now I plan to keep the tailgate up. I feel more vulnerable with it down. I don’t think it would fare as well as the bumper if someone decides to see what happens when they run into the
back of a truck.

For more info (and more scientific data to sort through), the following conditions existed: